In Action: Technical Preview of Power BI Reports in SSRS

Yesterday the SSRS team made the announcement that we can now consume Power BI reports inside Reporting Services. You can upload your Power BI files (.pbix) to the Report Manager, or deploy them to the Report Server from Power BI Desktop if you like.
To start off, I really like the features and the things you can do, however I also found some issues I will be talking about later.


How to get started

The SSRS team did a pretty good job describing How to get started with the Technical Preview, so I won't repeat that here, just read their blog.
A few caveats:

After having gone through the setup of your Azure VM you'll have to wait 10-20 minutes for your VM to be provisioned and you're good to go.

After logging in to your VM you can open the report manager via the SSRS Preview shortcut on the desktop and you end up with an overview of the available KPI's, Mobile reports and Power BI Desktop Reports available on the server: 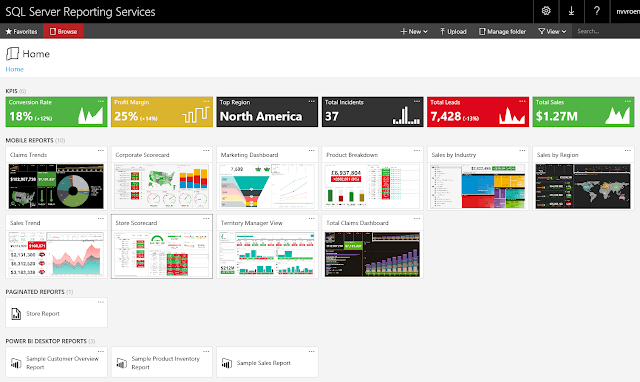 Clicking on one of the PBI Desktop Reports gives you the Power BI report (which was created with 1 page) in the report manager interface: 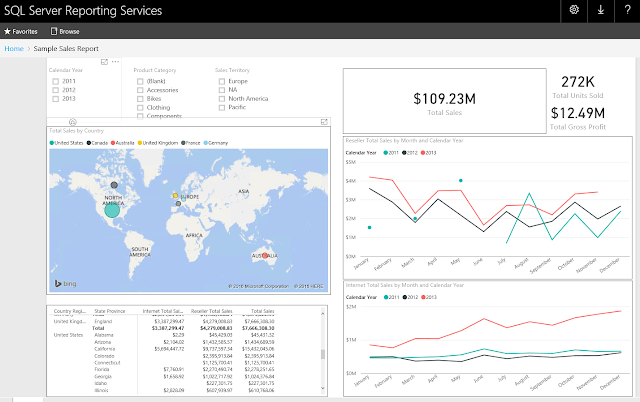 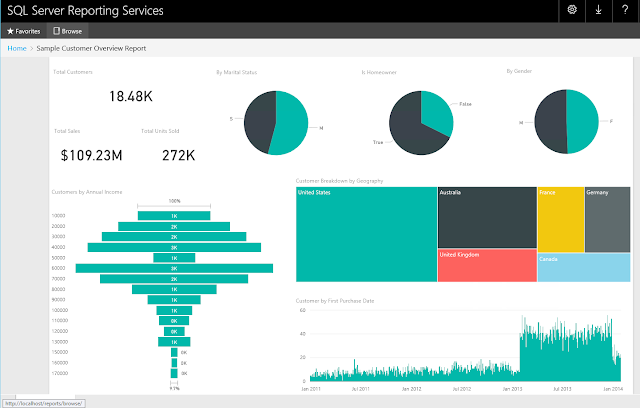 You can edit the reports in Power BI Desktop by clicking on the 3 dots in the upper right corner of the report tile in the web portal and clicking "Edit in PowerBI Desktop". By the way, I believe there's a space missing between Power and BI :-). 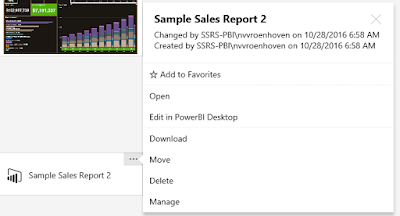 When you open the report in PBI Desktop you also get a pop-up saying they're busy opening your report, the links in that pop-up are still on the ToDo list I guess because they are pointing to https://go.microsoft.com/TODO :-)

As stated in an earlier announcement by the SSRS team: "This preview supports Power BI reports that connect "live" to Analysis Services models – both Tabular and Multidimensional (cubes). We plan to extend support to additional data sources in a future preview." You can see this by looking at the Data Source settings and in the lower right corner of the report in PBI Desktop. As a consequence of connecting live to SSAS you are not able to edit the data model or adjust any queries.

When you save the file you have the option of saving it to disk or directly to SSRS. 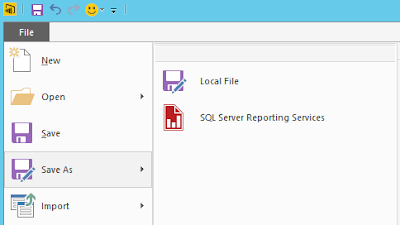 When you choose the option of SSRS make sure to type in http://localhost/reports instead of https for this VM. 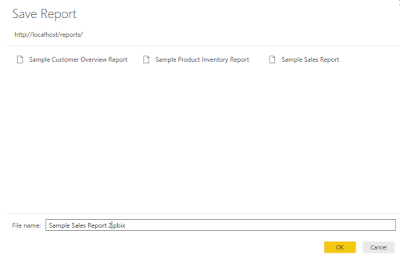 If you've already saved it once to SSRS and click save (or CTRL+S) afterwards in PBI Desktop, it keeps this setting and saves it automatically to SSRS.

You can also manage the report item with the following properties: 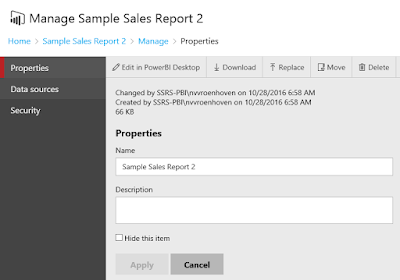 For now, only live connections to SSAS are supported, but that will certainly change in the future. You can also use credentials to connect to the SSAS instance, but for now I'll use the default settings. 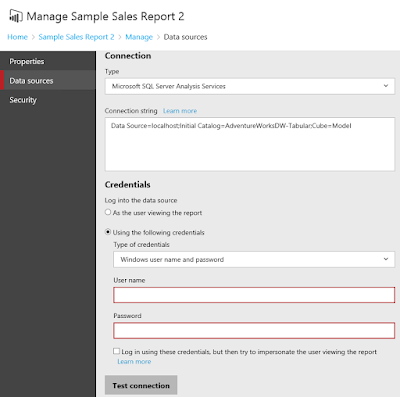 At my first attempt to test the connection I got an error message, the next attempts did work correctly, no idea why that happened.

You can also customize the security for a specific report, before doing so you get a confirmation dialog box to confirm your settings differing from the parent folder:

After I clicked Customize security, but didn't alter anything, I started to run into some issues I'll describe here.

I encountered this error when I tried to test the connection to the SSAS Tabular cube. The second attempt did work correctly. I made no changes to the settings, I only clicked around a bit.

After clicking the button "Customize security" I tried opening the report (I renamed the report to Sample Sales Report 2) again but the Power BI logo kept displaying. 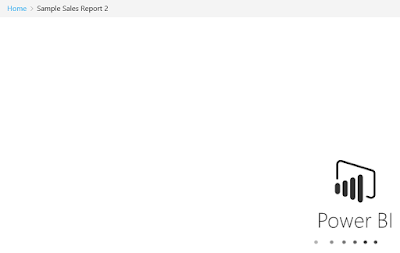 Opening the report in PBI Desktop also didn't work and resulted in the following error:

Also when I open the .pbix-file from explorer and try to save it to SSRS I get the following error:

After undoing the security changes, so clicking on "Use same security as parent folder" everything was working fine again.

All in all some great new features have been added! I bumped into some minor issues that I'm sure will be resolved in later versions.
Posted by Nicky van Vroenhoven No comments: Links to this post 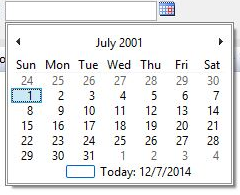 I'm creating some reports for a client and am working with SSAS Tabular. I therefore have to deal with MDX based parameters and I wanted to have my date parameter to resemble a Date Picker as you normally would have when using SQL Server as a source:

Microsoft has changed their MCSA and MCSE exams by aligning to industry-recognized areas of competence. There's no need anymore to recertify every (three) year, but you can re-earn you certification each year. Due to the fact that the technology changes faster than a few years ago, (SQL Server had changes in the way updates were rolled out earlier this year, Azure changes almost every week) they decided to switch to a more aligned model for certification.

The Data Management & Analytics Path is most appropriate for me and in detail looks like this: 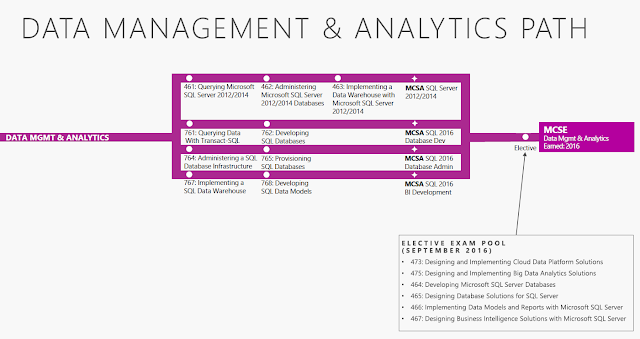 What this means is you will have to earn one of the MCSA's listed here and then take one elective exam to earn the MCSE. You can then re-earn the MCSE each year by taking a new elective exam and in this way adding knowledge every year.
The Microsoft Learning team is already developing a solution where some exams will be eligible for a retake every (calendar) year with rapidly changing technologies, for example Azure.
You can find more information here:

Since I made the switch to Pulse I started working with Dynamics AX, Microsoft's ERP system. This Tuesday Microsoft had a First Look event at the AXUG Summit 2016 on (the new) Dynamics 365 for Operations, which is the new name for Dynamics AX. Dynamics NAV is also renamed and is now called Dynamics 365 for Financials.

I came across a very good blog by Fredrik Sætre (b | @AxFredrik) which summarizes the First Look event very well. He speaks about the Common Data Model that will be replacing the Entity Story introduced earlier in AX 2012 R2 and will be the core of Dynamics 365, for AX, NAV and CRM.