Overlay Icons Not Showing Up In Explorer

I came across this issue, when using Dropbox or SVN for example (or every other source control tool) that once in a while the overlay icons, or ShellIconOverlayIdentifiers as they are officially called, of those tools are suddenly not working anymore. Restarting the Explorer doesn't work.

It seems that those icons have registry entries, so we can look at how many items we have in there and see if we are hitting the limit of 15. Why 15? No idea.. Some Windows developer brought this up a long time ago maybe? :)

Open Regedit (if you don't know how to, then you shouldn't be editing it), and go to
I currently have the following items in my registry: 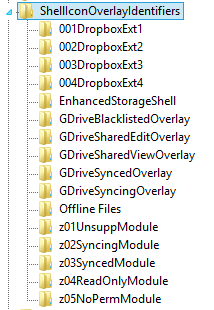 I edited the Dropbox-items so they are always on the top of the list. OneDrive and GDrive also both have overlay icons, so the limit of 15 can quickly be reached.

If there are more than 15 items, then either uninstall or reconfigure applications that are shown there or remove the registry entries manually (backing them up of course).

After you have made some changes in the registry be sure to restart the Explorer and you're good to go!