When you have your own row labels and would like to sort them in your own order you can create a set and have them always in that order, also after refreshing the data.

This is the starting point, we have (string) labels of the length of an employment. PowerPivot sorts them in this order, from 0 - 1 - 2 to 5. 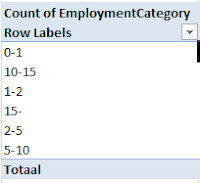 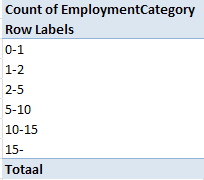 This can be achieved by creating a Set for the Row Labels. You can find the option on the (PivotTable Tools) Options ribbon, under "Fields, Items & Sets".

After selecting "Create Set Based on Row Items..." you can sort the items manually and give the set a relevant name. 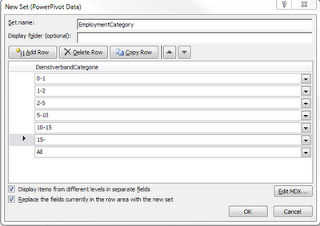 After creating the set it also appears in the PowerPivot Field List under Sets:

It's been a while since I've written a post due to holidays and busy days..
Well, here's a new post about a problem I ran into when installing / configuring a BizTalk application.

I was installing an application in a DTAP environment and came across the following error message when I tried to start the application (in Acceptation):

xlang/s engine event log entry: NullReferenceException exception occurred while the XLANG/s runtime enlisted a service.Error message:Object reference not set to an instance of an object.

After trying several blogs and forums, also with Error Code: 0x8004d00e I didn't find anything useful.
Then I saw two different versions of each dll in the GAC (MSIL and x86).
When I checked my DEV, I noticed the platform was set to "Any CPU", which had to be x86, because the A & P environments are running in 32 bit. After making a new MSI and importing it, I didn't have any issue anymore with starting the application. Another lesson learned!
Posted by Nicky van Vroenhoven No comments: Links to this post